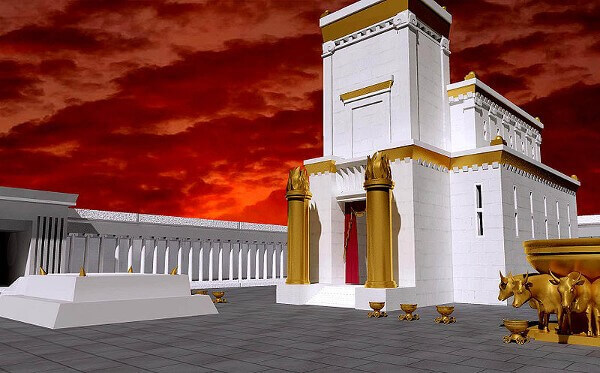 King David, Solomon’s father, gave him the responsibility of building the temple. The King Solomon temple was built according to God’s word given to his father. Remember?  It was his father who played the David Harp for King Saul. The building began in the fourth year of his reign. It took seven years to complete the King Solomon Temple.

Ark of the Covenant Contents

The innermost part of the King Solomon Temple that was built for the Lord was where the ark of the covenant would rest. It contained the Ten Commandments that were given to Moses at Mt. Sinai, Aaron’s’ rod and a pot of manna. It wa called the “Holy of Holies.” And it could only be entered by the high priest once a year on Yom Kippur. Yom Kippur is known as the “day of atonement.” It is known to the Jewish people as the holiest day of the year.

King Nebuchadnezzar of Babylon and his army plundered and pilfered the King Solomon Temple. Ten years later they overtook the city of Jerusalem and burned the temple and most of the city.  There have been no archeological digs of Solomon’s temple today because of religious and political reasons. There have been some artifacts that have been discovered however.

you can feel the presence of our Lord

Keep the temple of Solomon in mind during Christian travel tour to the Holy Land in Israel. You never know, you might just happen upon an artifact! I have heard that when you get off the plane in the Holy Land, you can feel the presence of our Lord. I can’t wait to visit there myself. I want to walk where our anointed Jesus Christ walked the streets of Jerusalem. And the surrounding villages and towns.

The King Solomon movie will give a good understanding of how he built the temple and reigned as King. You can watch this and other Christian movies and more right here at KNCB.org. We provide Christian entertainment for the whole family.