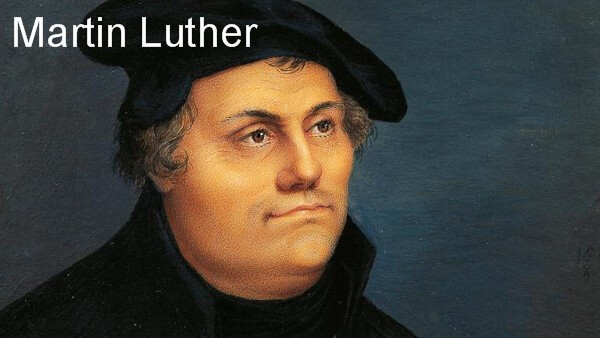 Martin Luther was born during the time of the Holy Roman Empire. His father a businessman wanted him to be a lawyer. However, one day Luther was almost struck by lightning. He thought this was a sign from God. As in the Christian song from “The Color Purple,” “God was trying to tell him something.” He made a vow.

Martin Luther became a Catholic monk. Later, he received a Doctorate degree in Biblical Studies. He became a professor. He was being prepared to change the world. As in Proverbs Chapter 19 verse 21 of the New Living Translation Bible, “You can make many plans, but the LORD’s purpose will prevail.” His father had a “good plan,” but God had a “better plan.” “Father Knows Best,” however, “The Heavenly Father” knows all things and has the best for you.

Martin Luther studied the teachings of Augustine. He and others gained insight into the Roman Catholic Church teachings. It’s doctrine and practices were not scriptural. There was dishonesty and mistreatment in the church. It had non-biblical views about salvation, the forgiveness of sin, and God’s authority.

Martin Luther Beliefs were as follows:

Martin Luther challenged the Roman Catholic Church. He penned “Disputation on the Power and Efficacy of Indulgences” or the “95 Theses.” On October 31, 1517, they were nailed, pinned or hung on the Wittenberg Castle Church door. The news of the “Ninety-Five Theses” reached the Pope in Rome. Luther was given time to renounce his beliefs. He refused at the Diet of Worms on April 17, 1521. His statement, “Here I stand. God help me. I can do no other.” The Roman Catholic Church was split.

Martin Luther was declared apostate and excommunicated. Among other things, his writings were burned. He refused to give up. In 10 years, he converted the New Testament from Latin to German.

Those who believed in the teachings of Martin Luther were called “Lutherans.” Like the term “Christian” it was initially used to poke fun at Luther and his followers. Lutheranism is one of the world’s largest denominations. Globally, there are at least 66 million Lutherans.

Today, the Book of Concord with Martin Luther ideas is still used. According to Pew Research, Lutherans have different views about the Bible. Some views are based on the authorship of the Bible. Others are concerned about whether or not it should be taken, literally. Then, there are those who are not sure or have other ideas.

Some followers of Martin Luther believe Jesus serves in three offices. He serves in the priestly as exalted Savior because of His death. In the kingly office he reigns in earth and heaven. The prophetic office refers to Jesus teaching and Jesus miracles. Want to know more?

Martin Luther Reformation Christian tours to Germany are available for Christians. You can follow in the footsteps of Martin Luther. Visit the Castle Church in Wittenberg where he was buried under the pulpit. Also, visit his birth place, Eisleben, where he lived and taught for 36 years and more.

How has this article ministered to you? Share your comments and additional research about the life of Martin Luther. Visit KNCB.ORG for more church history articles, church history videos, Christian Travel TV and more. Don’t forget to like us on Facebook. Thank You in Advance.