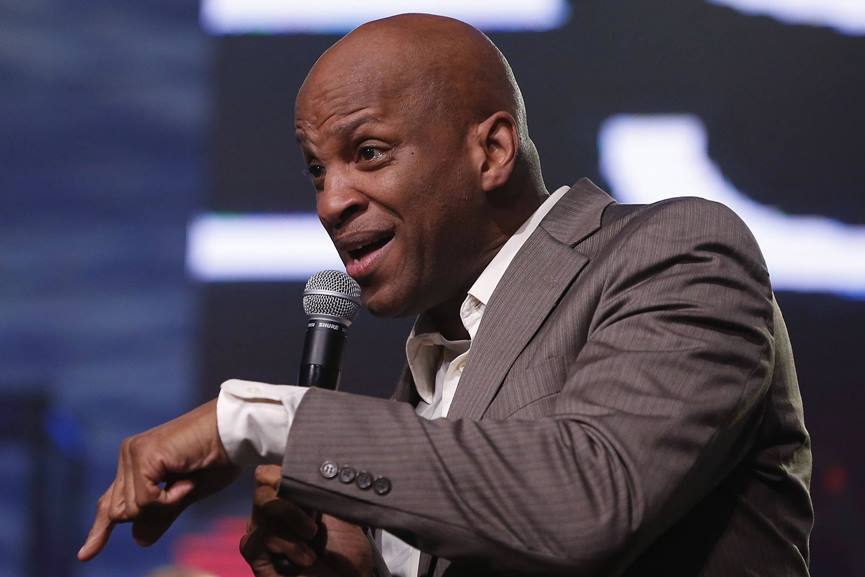 Great and Mighty is He! Glory to God! Donnie McClurkin is a top-selling international gospel singer and pastor. Learn how he transitioned from Eternal Victim to Eternal Victor.

Donald Andrew “Donnie” McClurkin was born to Frances and Donald Andy McClurkin on November 9, 1959. He was born in South Carolina. He lived most of his childhood days in Copiague, New York near Amityville. There were 9 other siblings in the combined families.

Several life-altering circumstances took place in the life of Donnie McClurkin, beginning at age 8. His 2-year-old brother was killed while they were crossing the street. His sisters became substance, abusers. He was sexually molested by a great-uncle and the great-uncle’s son. At age 9, he found comfort in church. He  accepted the Lord. He started reading his bible. Years later, Donnie would testify about the Healing Grace of God. He would tell about his rejection and deliverance from homosexuality.

Manifestations of the music anointing upon the life of Donnie McClurkin began to surface.  He joined the choir. Singing was his way of escaping. Songs were his Cry for Help. Donnie was encouraged by an aunt who sang with Andrae Crouch. He began playing the  piano and keyboard. He formed his first gospel group, at age 15. The Donnie McClurkin Singers was made up of 4 family members and 4 friends. In the future, they would become the McClurkin Project. He also formed the New York Restoration Choir. They ministered on the streets.

There was also a clarion call for Donnie McClurkin to preach the gospel. So In Love with Jesus, he set out to share the love of Jesus. He wanted to help evangelize the world. In 1989, he became the associate minister to Marvin Winans at Perfecting Church in Detroit.  After approximately 10 years, he was ordained as Pastor of Perfecting Church in New York.

Tragedy strikes, again, in the life of Donnie McClurkin. He was diagnosed with leukemia. Doctors told him that he could lose his voice and life. Thereafter, he took his case to Dr. Jesus. It was time for him to practice what he had been preaching. Pastor McClurkin used the prescription called, The Prayer pill. Creative miracles began to happen. He testified about how God healed him of cancer without chemotherapy. Later, a cyst developed in his throat. God healed that, too.

The multi-gifted ministry of Pastor Donnie McClurkin is demonstrative of Proverbs 3:4 “…you will find favor and good success in the sight of God and man. From a child, God has shown him His favor, in spite of his difficulties. He has had favor with man. Initially, an executive friend signed him with the RCA/Warner Alliance Label. Eventually, he would record with labels, such as Verity, Legacy, Savoy, Zomba, and Malaco Records.

Pastor Donnie as some call him, or Donnie McClurkin received several awards for his music ministry. He won 3 Grammy Awards and 10 Stellar Awards. He was the recipient of 2 BET Awards and 2 Soul Train Music Awards. He also received 1 Dove Award. He has 2 gold and 1 platinum studio albums. He produced 2 live albums of which 1 is platinum. Four compilation albums and 7 singles were also produced. Globally, he has sold over 10 million albums. As top Ghanaian gospel singer-songwriters, Willie & Mike would say, “Who Would’ve Thought that God would favor him, this way.”

The versatile music ministry of Donnie McClurkin is played on Christian and non-Christian radio stations. He is also featured on secular and Christian video channels. His songs made the  gospel, urban, and R&B charts and Billboard Charts. The requests for “Stand” and “We Fall Down” were constant. Donnie was surprised with a Special Gift. He was given a customized transportable recording studio. He could do radio and TV on the road.  He has the No.1 radio program in its New York slot. It is also well-known in the U.K. and other countries.

The supernatural empowerment of Donnie McClurkin’s voice has led many to receive salvation. Many have been healed and delivered. His music is a Kingdom Message to the Listeners.  Donnie’s music genres are hymns, black/urban gospel, praise/worship, contemporary Christian inspirational songs, and R&B. Languages and cultural rhythms are included in his songs. Several of them Dutch, Jamaican, Japanese, Russian, Spanish and African music styles.

In gospel music today, Donnie McClurkin has his own Christian television series, Perfecting Your Faith. He has appeared on The Girlfriends and The Parkers. He has starred in Christian movies, such as The Gospel and The Fighting Temptations. He worked with The Prince of Egypt and other secular movies. He’s been a guest on Good Morning America, The Early Show (CBS) and the TBN Christian broadcasting program, Praise the Lord. Donnie was also a judge on the gospel talent show Sunday Best. He was a guest on the Oprah Winfrey show. He has been featured in Jet, Charisma, and other magazines.

Like his mentor, Andrae Crouch, the anointing for Donnie McClurkin ran down. It has certainly made room for him at the top. He has been featured in concerts with Joann Rosario, BeBe &  CeCe Winans, Crystal Lewis, Jaci Velasquez, Yolanda Adams, Karen Clark-Sheard and other gospel artists. He shared platforms with Bishop Jakes, Bishop Gilbert Patterson and other great preachers. God deserves Total Praise.

Donnie McClurkin has also shared the stage with secular artists. He believes that “Gospel music is best in the secular, just like the light is best in the dark.”  It’s OK as long as we do not “dumb down” or compromise the gospel message of Jesus Christ. Donnie believes the gospel is for everyone, everywhere. We Are All One. We are all souls in God’s sight. He has been in events with LL Cool J, Chaka Khan, Prince, and others.

Donnie McClurkin is also involved in global missions. As stated in the song title, I’m Your Servant Lord, he is a global humanitarian. There is a special place in it heart for Jamaica and other countries. He has donated almost $700,000 dollars to Jamaican medical missions. It equals over $6 million American dollars. The funds will help purchase medical supplies, medication, and medical equipment. Donnie has also made contributions to Feed the Children, World Vision, and Operation Compassion. The earnings of one of his concerts went toward the Haitian earthquake effort. It’s All About the Love.

Despite domestic abuse and homosexual propaganda, Donnie McClurkin is still able to Stand He is also an accomplished author. He wrote Eternal Victim, Eternal Victor. It is an autobiographical inspirational testimony of how he overcame homosexuality through prayer.

Allow me to close on an inspirational note using some of Donnie McClurkin’s song titles. Be Encouraged. You are who He says you are. We are who He says we are. We Are Victorious! You are not an “Eternal Victim.” You are an “Eternal Victor.” In trying times and crying times, remember, God Has Not 4Got. He’s answered your prayers before. He can do it Again, at Anytime. “Now faith,” says, everything is Alright. So, Let the Praise Begin. While you Wait On the Lord, Praise Him. Shake Yourself Loose from your challenges. Let It Go! Praise Him, while he works things out for you. Remember, He is The Great I AM. I AM is your Healer. I AM is your Provider. I AM is who or whatever you need Him to be. Great and Mighty is Our God!

We hope you were blessed! We welcome your response. Read more articles at KNCB.ORG. Watch Christian music videos. Be uplifted! Experience the music ministry of Judy Jacobs and other gospel music artists. Hear and see Sunday sermon videos. Get a life-changing word from Bishop Craig Banks, Bishop Paul Morton, and others on Say Amen TV. Enjoy family-friendly entertainment. Watch free online Christian movies. Visit the Faith Shop. See our Walk by Faith greeting cards and photographic prints. Like us on Facebook at Kingdoms Network Christian Broadcasting. Thank You! God Bless You in Your Kingdom Endeavors!