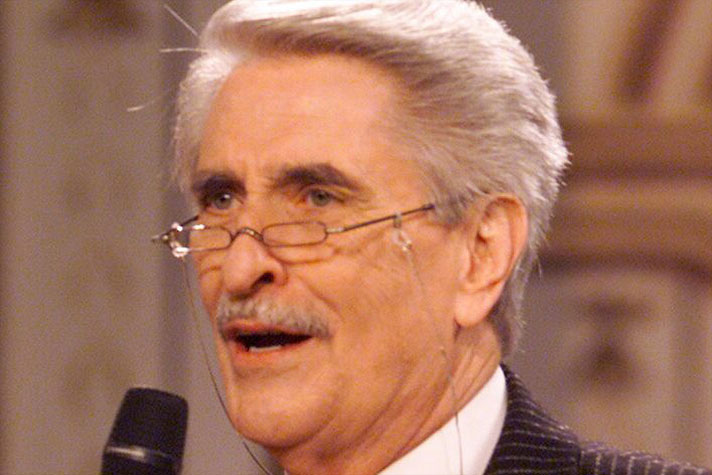 Hello, World! Television Evangelist, Paul Crouch, was a great international Christian broadcasting network televangelist. The TBN president, founder, and business executive wanted to use technology to reach the world for Christ. He did it!  What a mighty creative miracle! Glory to God!

“The world laughed-many in the church world laughed, but with over 4,000 stations and twenty-six satellites on the air worldwide-well, they’re not laughing anymore.”   -Paul F. Crouch, Sr., Hello, World!

Paul Crouch was an innovative and creative kingdom entrepreneur and visionary. He became interested in broadcasting at an early age. He desired to spread the gospel of Jesus Christ over the airwaves, globally. Little did he know how God would really use him. Christian broadcasting would never be the same. As sung by Israel Houghton in Christian videos, they were “Going to Another Level.”

“Eye hath not seen, nor ear heard, neither have entered into the heart of man the things which God hath prepared for them that love Him.” (I Corinthians 2:9).

He was raised by his mother, Sara Crouch, and his grandparents. His father, Andrew F. Crouch, died when he was seven. His two brothers, Phillip and John, also preceded him in death.

In 1955, Paul Crouch, begins preparing himself for ministry. As a Christian disciple, he received a degree in theology(CBIS, 1955). Years later he would receive three honorary degrees. He was awarded a Doctor of Litterarum(CGST, 1981), a Doctor of Divinity(ACTS, 1983), and a Doctor of Laws(ORU,1985).

In 1957 it was not good for Paul Crouch to be alone anymore. At the age of 23 he met and married the former Janice Bethany. He was the son of missionaries. She was the daughter of pastors. Both were members of the Assemblies of God Church.  Paul Crouch, Jr. and Matthew Crouch were born to this union.

Paul Crouch, future television evangelist, developed an interest in radio broadcasting. While in college, he helped build KCBI-AM. It was an educational radio station for Central Bible Institute and Seminary. Later, he was employed by KSRD radio in Rapid City, South Dakota. Paul was promoted from announcer to program director, almost immediately.  Eventually, he became the manager of KRSD-TV, a subsidiary of NBC.

In 1961, Paul Crouch began preparation for his future in global missions. He was employed by the Assemblies of God in Burbank, California. For 4 years, he was appointed as the administrator of television production. Foreign missions audio-visuals including missionary stories were produced. Children’s materials were also made available.

From 1965-1970, the anointing to broadcast on Paul Crouch brought him closer to his destiny He was hired as general manager at KREL. He also bought stock in KREL radio. Paul was responsible for KREL’s 5,000 wattage increase. Next, he became general manager for KHOF-FM and KHOF-TV.

Paul Crouch and his wife, Jan, began to apply their broadcasting skills in personal ministry.  They founded the Trinity 24-hour Broadcasting Network, in 1974.  Known as TBN, it became the largest Christian Broadcasting Network in America and the world. It has been ranked with NBC, CBS, and FOX. It can be seen on almost 90 satellites, 18,000 television, cable associates and the worldwide web. TBN has been listed in the Top 30 of the nation’s station groups.  The network is broadcast on almost 300 major national network television stations. It can be seen in 75 countries in 11 languages. TBN also has a children’s channel, a youth network, and a church channel. Spanish, Italian, Russian, and Persian channels are also available. A healing channel and a high definition network are also included. TBN can be viewed on all continents, except Antarctica.

The creative writing anointing was also on the life of Paul Crouch. The Christian broadcasting network founder authored 5 books.  The Shadow of the Apocalypse links bible prophecy and current events. Hello, World tells how the Christian cable network TBN was created.  The Omega Code is a fictitious book with prophetic overtones. Megiddo is the sequel to The Omega Code. I Had No Father But God was dedicated to his sons. It was a messaged to the body of Christ. It was a message to Christians and encouraged the importance of listening to God and following His plan for your life.  Paul Crouch was also executive producer for 5 Christian movies which were based on his five books. Paul passed away on November 30, 2013.

Paul Crouch and Jan Crouch held on to the kingdom dream in their hearts. Never give up. Hold on to yours. Remember the Sunday sermons and youth ministry sermons about Joseph’s dream? “One night Joseph had a dream, and when he told his brothers about it, they hated him more than ever.”(Genesis 37:5).  Like Joseph’s family, most people will not take your dream serious. His brothers tried to kill him.They tried to kill his dream. Those he trusted and those he loved did not love what he loved. As said by T.D. Jakes, “Get ready, get ready, get ready!” Get ready for the good and hold on. Hold on with “bulldog tenacity.”

As stated by Paul Crouch, “ Thirty years ago, with one borrowed camera, a shower curtain, and only two hours a night on a station we did not even own, our wonderful partners helped us name it…” Trinity Broadcasting Network which was the name of the dream before it became a network. Name your dream and believe in your dream. Cry out for wisdom. Be willing to walk in obedience to God. He is Jehovah Nissi. He’s able to help you overcome the opposition and obstacles. Be determined and diligent. Remain faithful in the face of faultfinders. Stay calm and prayerfully, committed. Distance yourself from dream killers. The language of destiny sounds like gibberish to them.

I can imagine Paul Crouch and Jan Crouch wondering, at times, if their pursuit was selfish or godly. “Did God really tell us to do what we are doing?” “People think we are crazy.” On the other hand, God honors our motives even if we thought He told us to do it..  “…for man looks at the outward appearance, but  the Lord God looks at your heart.” (1 Samuel 16:7). God would not allow anyone or anything to stop the TBN dream. It was Paul’s desire to take the Gospel of Jesus Christ around the world, at any cost. In Christianity today, the gospel is being preached via radio, television satellite, and the internet unto the “ends of the earth.” Today, the dream lives on! Hello, Somebody! Hello, World!

I hope you have been encouraged. Share your comments. We anticipate your feedback. Read more articles at KNCB.ORG. Also, watch Christian videos or listen to Christian music videos by frequent TBN gospel music artists such as Judy Jacobs, Micah Stampley and more. Watch Christian videos and see and hear missionary stories. Listen to Sunday sermons by Bishop Craig Banks, Bishop Paul Morton and others or watch Christian movies such as Joseph and King David.