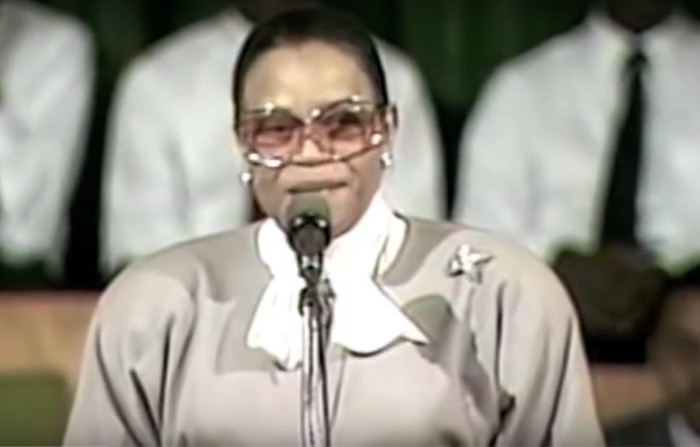 Put Your Hand in God’s Hand. Look Up and Live. Read about the renowned Dr. Mattie Moss Clark, gospel music musician, singer and composer. Find out how this great African-American educator, conductor and producer carried out the Great Commission using music. Learn how one of the best southern gospel music pioneers, choral/ choir director and arranger became one of the world’s notable gospel music artists. What did her fire and passion for music ministry lead to?

Wonderful, Wonderful Dr. Mattie Moss Clark, according to Rudy Hawkins, as quoted in the Michigan Daily, is the “Bach of black gospel music.” She became known as the female version of the classical German composer, Johann Sebastian Bach. Two of Bach’s greatest works are the Magnificat and Ave Maria. She has also been classified as the First Lady of Big Choir Gospel by Rev. Dr. David Hall.

By the Will of God, Mattie Moss Clark entered the earth realm on March 26, 1925. She was born to Fred and Mattie of Selma, Alabama. Her father was a preacher. Her mother was a singer, evangelist and musician. They were members of the Holiness Temple Church of Christ in Prayer. Mattie started playing the piano at the age of six. She began providing music for church services, at age 10, or 12. All nine of the Moss children were gifted in music.

Jesus Has a Lot to Give. Dr. Mattie Moss Clark had a lot to offer. It was her desire to pursue a music major at Fisk University. She took piano and voice while in high school. Mattie also played the organ. After the death of her father, she enrolled in music at nearby Selma University to be near her mother. She studied choral and classical arrangements for 12 years. Mattie continued to play for their local church while attending classes.

Later, Dr. Mattie Moss Clark moved to Detroit to play for her sister’s church and other congregations. Her favorite place was Greater Love Tabernacle COGIC. She decided to Try Jesus and received the Holy Ghost. Dr. Clark became the Minister of Music under the leadership of Bishop William Rimson. And later became Music Minister for Bailey Temple COGIC in Detroit, under Bishop John Bailey. After Bishop Bailey’s death she became a member of the Greater Mitchell COGIC, under Bishop J.H. Sheard. Showers of blessings continued to pour.

With Jesus All the Way, Dr. Mattie Moss Clark was able to record with several choirs. She became state music director for the Southwest Michigan COGIC jurisdiction. She started the tradition of separating soprano, alto and tenor parts in songs, In 1958, Dr. Clark formed and recorded with the Southwest Michigan State Choir. It was the first album recording of a gospel choir. The three albums met the certified gold standard of 500,000 copies. God is Greatly to Be Praised. You can hear the albums on Christian radio online.

Striving to Be More Like Jesus, Dr. Mattie Moss Clark believed in the spirit of excellence. She was known as a strict perfectionist. Because of her leadership and musical anointing, COGIC music departments would never be the same. With persistent determination, she climbed to the top, she made it. Praise the Lord All Ye People.

Because of the Wonderful Grace of Jesus, the Christian gospel music discography of Dr. Mattie Moss Clark is incredible. Music technology was a thing of the future. Vinyl LP records and vinyl albums were the norm. Still, she recorded at least 50 albums and at least 100 songs. She wrote at least 1,000 songs and compositions.

The phenomenal gospel-classical-choir-orchestra ability of Dr. Mattie Moss Clark also led to other projects. With her Mind on Jesus, she established the Mattie Moss Clark Conservatory of Music. It would provide training for future musicians, singers and songwriters. Training in various orchestra instruments was also available. Dr. Clark also conducted workshops, seminars, rehearsals and musical plays. She contributed to and helped edit the COGIC Yes, Lord Hymnal. She created a talent discovery program, A Song is Born. New found talent was displayed before 1,000’s at conferences and conventions.

Also, To Let His Will Be Done, Dr. Mattie Moss Clark was active in community affairs. For 11 years, she directed the General Motors Cadillac concert choir. She also formed choirs for annual NAACP Freedom fundraiser dinners and other community events.

Dr. Mattie Moss Clark believed you should Give Your Best to Jesus. Answering the exceptional call led to the receipt of several awards. Trinity College of Pennsylvania awarded Dr. Clark with a Humanitarian Honorary Doctorate, in 1981. In 1990, she received the Michigan Heritage Award. She also received the Gospel Pioneer Award as well as others.

Worthy is the Lamb. “The Blessing” anointing that was on the life of Dr. Mattie Moss Clark is still evident today. Her music legacy lives on in her daughters, the infamous top Christian songs, Grammy Award-winning Clark Sisters. The Clark Sisters are also Gospel Music Hall of Fame inductees. In 1958, Dr. Mattie Moss sang about Going to Heaven to Meet the King. She left us in 1994. Today, the Clark Sisters participate in diabetes fundraising events in memory of their mother.

Believing God’s Got All You Need, Dr. Mattie Moss Clark’s ministry lasted for 35 years of her 69 years. Sharing the gospel message through music was her priority. Many were saved, set free and delivered. She also had a heart for young people and they loved her too. She inspired and encouraged them in their musical efforts. Dr. Clark had a great respect for gospel music. She believed it was the Word of God set to music.

We pray that your knowledge was increased. Watch inspirational Christian videos or travel to different countries around the world at the Travel Channel at KNCB.org. Blessings in Your Kingdom Endeavors!