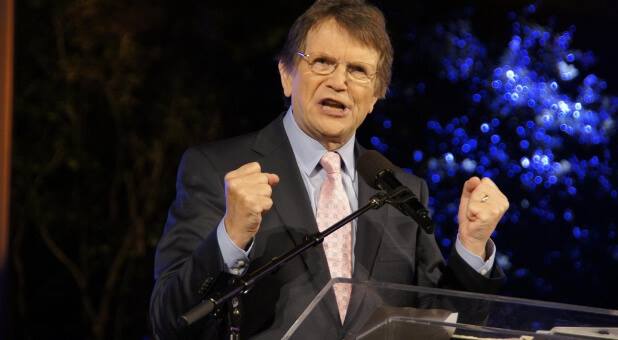 We act….God acts. The reputation Reinhard Bonnke goes before him. He is a powerful, global evangelistic Christian crusades teacher, preacher, and orator. As a young teenager, he wanted to go to Africa. He became known as Africa’s Evangelist. Reinhard Bonnke is married to Anni Suelz. They have three children, Susie, Kai-Uwe, and Gabrielle. They have eight grandchildren.

Reinhard Willie Gottfried Bonnke was born April 19, 1940, in Konigsberg, Germany. He felt the pain, poverty, and perils of WW II refugee camps He was saved at age 9 and Spirit-filled at 10. His father was ex-military and a pastor. Young Reinhard saw Africa being washed in Jesus’ blood. He heard God say Africa Will Be Saved. He accepted his evangelistic missionary call. As a teen he prepared and today he shares the message of the gospel of Jesus Christ message with miracles.

Great African Outpouring Evangelist Reinhard Bonnke is a Word of Faith contemporary of Benny Hinn. See Benny Hinn interview him on secular and Christian video channels. Watch him on Christian networks. Hear him on internet Christian radio. As a close friend, he prayed at Benny and Suzanne’s second wedding. He called it a miracle.

Reinhard Bonnke was a theological student in Wales. He graduated from the Trinity School of Ministry and became a pastor. Bonnke received an Honorary Doctorate from Regents University and a Doctor or Letters from International Theological Seminary. Also, he founded the online Reinhard Bonnke School of Fire and hosts the global Fire Conference. And formed Christ for All Nations(Cfan). Evangelist Bonnke’s motto is Winning Millions of Souls for Christ One at a Time.  Evangelist Daniel Kolenda and Peter van den Berg are also a part of the Cfan Team.

Christian leader Reinhard Bonnke is also a published author.  He has written almost 100 books and shares his evangelistic vision for Africa and the world. He published his autobiography, Living a Life of Fire. Books written by Bonnke are given as seeds to millions. Some of his main themes include evangelism, faith, the Holy Spirit, and the faithfulness of God.

“Anyone can believe when God is already moving. But real faith

is when you step out when it seems that God is not moving.”_Reinhard Bonnke

Step Out in Real Faith! For more articles visit us at KNCB.ORG.  Also, Get a word from the Lord. Watch great sermon videos and listen to some great sermon audio teachings. Be uplifted. Listen to Christian music videos. Grab some popcorn and watch a free Christian movies. God Bless You! We value your connection!