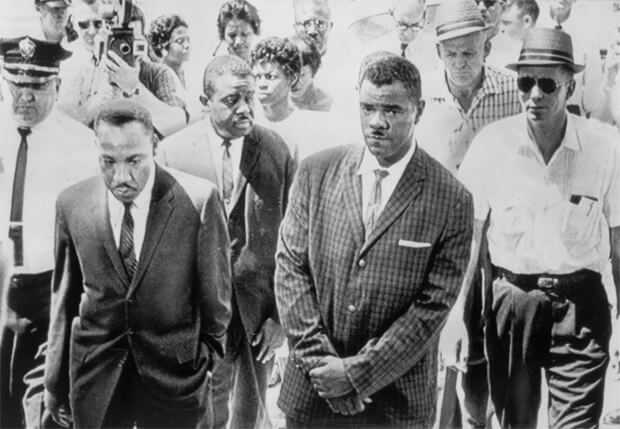 On December 14, 1961, the SCLC, and Dr. Martin Luther King, Jr. became involved in the Albany Movement. The desegregation movement was organized by students of the SNCC, the Albany NAACP and at least 8 others were involved in the civil conflict. It was organized on November 17, 1961. Dr. William G. Anderson was the leader. The Albany movement was another quest to end racial segregation. The event was televised nationally. However, it didn’t accomplish its goals. King was arrested with other peaceful activists. King declined bail until they honored the protestors requests. When King left town, business was as usual. The privileges were lifted.

Dr. Martin Luther King went back to Albany, in July of 1962. He was arrested again. He chose 45 days instead of paying the fine. The wise Police Chief Pritchard arranged for his fine to be paid. King was released. The $178 fine was paid by Billy Graham, according to the  King Center. King stated that there have been incidents when people were  “kicked off lunch counter stools…ejected from churches…thrown into jail”. “Being kicked out of jail” was new to him.

The Albany Movement was a great eye-opener for Dr. Martin Luther King, Jr. It led to a new civil rights plan of action. From now on, he would steer clear of pre-existing protests. He would remain diligent to those he could control. This unsuccessful incident put a damper on the public view of the Civil Rights Peace Movement. Nevertheless, another civil rights victory was coming.

“The time is always right to do what is right.”

I Have a Dream

In 1963, Dr. Martin Luther King, Jr. and others used nonviolent marches, sit-ins, kneel-ins in and boycotting in Birmingham from lessons he learned during the Albany movement. Lack of funds and arrests led to John Bevel’s idea of using children. Police used dogs, clubs, high-pressure water hoses on at least 1,000 black children as television cameras rolled. The John F. Kennedy Administration and the nation were furious. Jim Crow signs came down. Blacks could have access to public places, and more. A counter-attack took place. Four later, 4 girls were killed in a church bombing by the KKK. Dr. King eulogized three of them. King’s brother’s house was bombed.

In 1963, the famous Martin Luther King Jr. speeches like the “I Have a Dream” speech was delivered by Dr. Martin Luther King, Jr. The March On Washington for Jobs and Freedom was held. King and others went to pressure the federal government. At least 250,000 attended. The Albany movement was a call to end racism and extend equal rights.

The accomplishments of Dr. Martin Luther King, Jr. awards were great. He received the 1957 Spingarn NAACP Medal. In 1958, he was awarded the Anisfield-Wolf Award for Stride Toward Freedom. The Albany movement was just the precursor for what would become one of the greatest movements in American history today. In 1963, he was named Man of the Year. Martin Luther King Jr. awards included his being the recipient of the 1964 Nobel Peace Prize. The Synagogue Council of America issued the Judaism and World Peace Award to him, in 1965 and in 1966, he was awarded the Margaret Sanger Award for Planned Parenthood.

To read more about Martin Luther King Jr., the Albany movement, and his fight for freedom for African Americans, visit KNCB.org. Our Christian broadcasting network offers free Christian movies and a variety of Christian videos on demand and audio sermons for your viewing and listening pleasure.