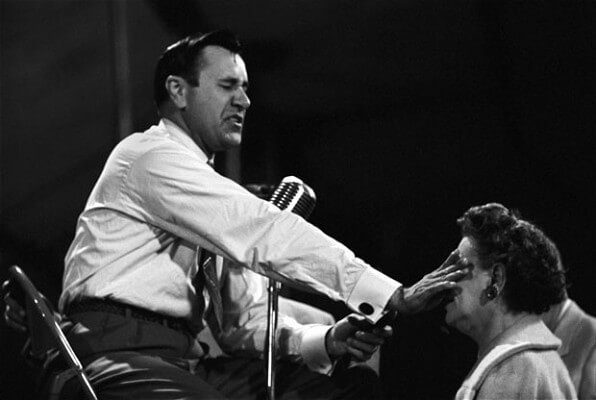 Something Good is Going to Happen To You! Oral Roberts was a famous pastor, teacher-preacher, and faith healer. He was also an outstanding international radio and television evangelist and college chancellor. He was in the Top 100 of U.S. respected leaders, and more.

Cherokee Granville Oral Roberts was born January 24, 1918, in Pontotoc County, Oklahoma. His father, Ellis, was a Pentecostal preacher, church planter, and poor farmer. His mother, Claudius, was a prayer warrior. Many were healed and saved by childlike faith.

Evangelist Roberts had early life events similar to other renowned evangelists. For example, Reinhard Bonnke was the son of a pastor, too. Oral used giant mobile gospel revival tents like Bonnke. Both Sheryl Brady and Oral Roberts began ministry without a seminary or college degree. Both turned their backs on their evangelical beliefs. Both were healed of tuberculosis and established ministries and colleges. Like Benny Hinn, Oral Roberts was also healed from stuttering.

After being healed, Oral Roberts accepted his missionary call. On Christmas Day in 1938, he married Evelyn Lutman Fahnestock. The teacher was a Pentecostal preacher’s daughter and an intercessor, too. They traveled and ministered together. Later, Oral enrolled at Oklahoma Baptist College and Phillips University. Furthermore, He was awarded several honorary doctorate degrees.

Jesus miracles were evident in his Christian crusades.  A shot was fired at him. He was in the news. God was preparing him for TV. In 1947, he resigned his pastorship. In 1948, like Lester Sumrall, (LeSEA), Oral Roberts Evangelistic Association (OREA) was born. Tent seats increased to 12,000. He conducted at least 300 global crusades.

Oral Roberts founded Oral Roberts University and built the City of Faith Christian hospital. It closed due to lack of funding. Despite family and ministerial difficulties, his legacy remains. He retired at 75. Evelyn left for heaven in May 2005, at 88. Oral joined her in December 2009, at 91.

Your faith begins to move, to act, when the power of God supernaturally empties you of doubt and fills you with a knowing. You come into a state of knowing that you know that you know. In that instant you cannot doubt. _ Oral Roberts, Sr.

Expect a Miracle! The KNCB.ORG team wants you to know that God wants you well, prosperous, and whole.  Gain knowledge and be empowered by more Christian articles and be uplifted by Christian praise and worship. Be impacted by sermon videos and enjoy free Christian movies.  Strive to be all God has called you to be!