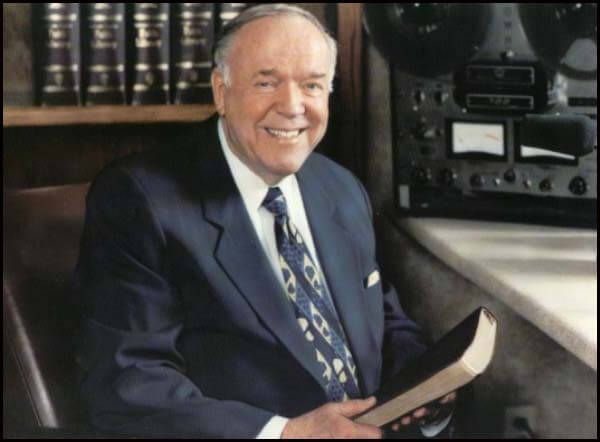 Think faith thoughts. Speak faith words! Kenneth Hagin (Erwin) was born on August 20, 1917. His parents were Lillie and Jess Hagin of McKinney, Texas. Kenneth was born with an abnormal heart and an incurable blood disease. At 15, he was paralyzed and bedridden. At age 16, he died and saw hell 3 times. After the third death, he repented and asked God to heal him. He received his miracle. At 17, after high school, he became a preacher.

Kenneth Hagin began as a Southern Baptist preacher. He began to study supernatural healing and miracles. Later, like Paul Crouch, he became a Pentecostal minister. At age 20, he pastored 6 AOG churches. He saw the first of 8 prophetic visions of Jesus. He believed God was calling him to Christian field ministry. This move would prepare him for his future All Faith Crusades. He taught at least 5 basic evangelical beliefs. They are faith, divine healing, the anointing, miracles, and prophecy. Mark 11: 22-24 was one of his favorite Bible references.

Former personal mentor for Kenneth Copeland, Kenneth Hagin began his global media vision. He established the Kenneth E. Hagin Evangelistic Association, now Kenneth Hagin Ministries. A magazine and radio broadcast was next. A publishing house, audio sermons, and a video teaching site followed. Christian literature for biblical research is available. You can find answers to questions, such as Are Christian crusades real when it comes to healing?

The 7-facet Rhema ministry of Kenneth Hagin launched a weekly Christian television network program. A prayer center, a healing center, and a prison ministry were also constructed. Global colleges and churches were built. Alumni-ministerial and correspondence school facilities were added. Youth and children’s ministry activity centers and more are also a part of his vision.

Similar to E.W. Kenyon, first Word Faith father, Kenneth Hagin taught Say it, Do it, Receive it, and Tell it. Hagin became the “modern father of the Word of Faith Movement.” A graduate of Harvard University, Kenneth Hagin’s faith legacy also includes almost 300 books. They are filled with teachings, missionary stories, and more. His Christian bestseller is the Believer’s Authority.

Kenneth Hagin was called Dad Hagin, Papa Hagin, and Brother Hagin, by some. He loved going home to Oretha, Kenneth, and Patricia and spending time with grandchildren and great-grandchildren. Kenneth Hagin ended his earthly ministry, September 19, 2003, at 86.

Do what God says do. Endeavor to be faithful, no matter what happens or what comes.

And leave the results to God. _ Kenneth Hagin

Read more informative Christian articles about other persons, places, and events at KNCB.org. Watch free Christian movies, such as the Jacob Movie online or listen to great Christian music artists videos. God Bless You! You can have what you say!