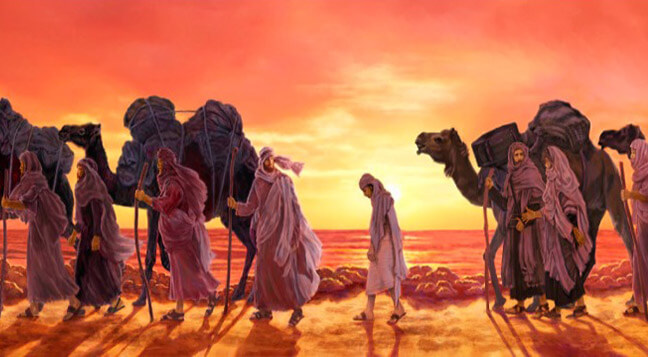 Sermon Audios on Life of Joseph

God has always had the heart for those that love him and are obedient. It is critical to point out with the sermon audios on the life of Joseph, that he was born to the grandson of Abram. His direct lineage is the patriarchs of the Jewish faith. Watching a movie of Jacob and the Joseph movie demonstrates the fact that God had every intention of fulfilling his promise to Abram. Blessing him and his people a land that would “flow with milk and honey.” The process began by the birth of Isaac and Jacob. It continued with Jacob fathering 12 sons that became the founders of the 12 tribes of Israel.

God always follows through on promises. He has proven this time and again throughout the ages. One of the most valuable lessons is God calling Abram out of a pagan world and promising him land that would be nothing short of perfect provision.

Sermon Audios on Life of Joseph

Listen as the story unfolds during sermon audios on life of Joseph. How it placed him in a position to help his family and people survive a seven-year famine. It ensured the formation of the 12 tribes of Israel. Jacob was a treasure to his father Jacob but drew the ire and jealousy of his brothers. He was betrayed and sent off to enslavement in the land of Egypt.

Gen 37:28 So when the Midianite merchants came by, his brothers pulled Joseph up out of the cistern and sold him for twenty shekels of silver to the Ishmaelites, who took him to Egypt.

The siblings told Jacob that Joseph had been killed by a wild animal. The Jewish people were looked upon as valued members of the community in the time of Joseph. God was willing to use this situation mightily to elevate Joseph. As a result, to be second in command of Egypt under Pharaoh himself. Why? Because of his ability to interpret his dreams accurately.

There was a new king in Egypt. And he did not remain friendly towards the Israelite people. As foreigners in Egypt, they were placed into captivity and used for intensive labor the better part of 430 years. This would be the beginning of Exodus. It is stated in various historical accounts that Moses was a direct lineage of Abram. Joshua, Moses’ helper, is said to be the 11th in line after Joseph. Furthermore, it demonstrates the desire of God again to free his people and send them to the land he promised through the lineage of Joseph.

The modern-day world has witnessed the completion of this promise made long ago in the beginning with the Abrahamic covenant. Israel became a nation in 1948. You can appreciate the long, arduous path it took through the generations when you listen to sermon audios on the life of Joseph. The people of God finally had a stable home to call their own. In the wake of their nomadic past, they have left a rich heritage and knowledge of God. Intended for all of humanity in which to share and partake.

All things considered, understanding the life of the patriarchs of Christian faith in God is the only real way to gain knowledge of the deep heritage. In fact, ties to the promised land exist still to this day. The sermon audios on life of Joseph can answer many of the questions people have as to why Israel is where it is. In addition to how the Jewish people got there. We can help you with one of the most relevant topics for sermon audios that any ministry can put together.

Many revelations can come from the study on Joseph alone. If you have sermon audio recordings or video teachings on the subject of Joseph, contact us today and find out how they can be uploaded for others to enjoy.