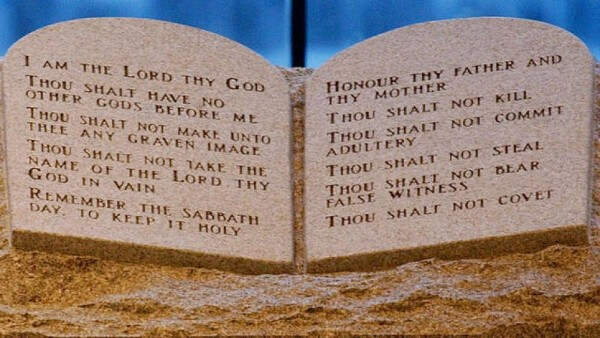 Moses original ten commandments were written by the finger of God. It was while Moses was up on Mt. Sinai that God himself wrote on tablets of stone to take down to the people. It would be their law given by God on how to live. What He expected and commanded.

No one or animal could pass this or they would be killed.

Christianity today still believes in and abides by these original ten commandments. I have watched an awesome documentary about Mt. Sinai. It actually shows and verifies the very things spoken of in the bible. You will see the rock that was split open by God for water and how the mountain had like a barrier at the base of the mountain. No one or animal could pass this or they would be killed.

Doing a little research I discovered that two tablets of the original ten commandments were discovered in a cavern about 100 feet deep. It was during the Gulf war in Iraq.  It is reported that the site was near to the Euphrates river and about 80 miles north of the Kuwaiti border. It was reported that the tablets were flown to the United States. Scientists were stunned what was written and confirmed that the letters were burned, almost like a laser, into the rock. It reminds me of the biblical scrolls found in 1947 by a shepherd boy that were also found in a cave. I suggest you visit the Dead Sea Scroll exhibit. It is truly amazing!

If your interest is peaked, you can watch the Exodus movie here at KNCB.org.  Get a better understanding of the scripture in the bible. We also have many other Christian movies to watch along with Sunday sermon videos. Learn about our anointed, Lord and Savior, Jesus Christ.

I suggest booking a flight to the Holy Land in Israel if you are searching for ideas on your next Christian travel destination. Grab your MP3 and listen to audio sermons or places to visit during your stay.

I hope you have enjoyed reading this short but informative article about the original ten commandments. I actually learned a couple of things myself. And that’s always a good thing.