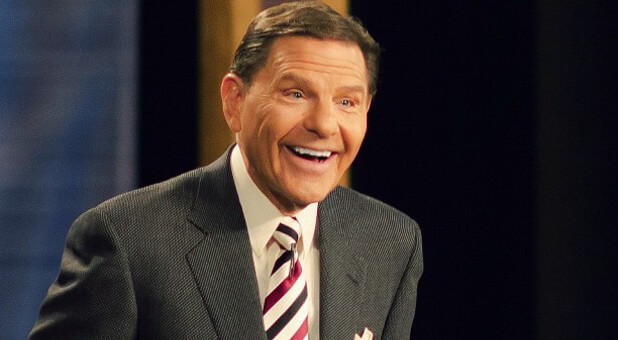 Dream Big. Talk Big. Turn Your Faith Loose! Kenneth Copeland was born on December 6, 1936, in Lubbock, Texas to Aubrey and Vinita Copeland. They lived near the Air Force base.

Kenneth’s desire to be a pilot came true.  He became Oral Roberts pilot and chauffeur at ORU.

In 1967, the end time prophet began Kenneth Copeland Ministries(KCM). Jesus is Lord became the ministry motto. A Christian newsletter the Believer’s Voice of Victory was published. Today, it is a magazine. The Believer’s Convention, a Healing School, and a World Communion Service began. Letters and calls in the 1,000’s led to a 24-hour Prayer Center and a Partner Letter Ministry.

Another Kenneth Copeland ministry project is the online adult Believer’s Academy. Superkid Academy was created for youth ministry. Adventure missions such as the Reaction Tour to Uganda are sponsored. Disaster, military, and prison ministry outreaches were created.

Kenneth Copeland is also a gospel recording artist, songwriter, and musician. Before Christ, he was a Top 40 secular artist. After salvation, he released 33 albums. His Christian gospel song Only the Redeemed was a Grammy nominee. Pastor Copeland has written over 20 books and study guides. Equally important, he is also an actor-producer and has been affiliated with at least 3 Christian movies.

The global ministry of Kenneth Copeland has been around for 48 years. The KCM headquarters and the Eagle Mountain International Church are located in Newark, Texas. Eagle Mountain is also the home of the Kenneth Copeland Airport and the KCM family. KCM facilities are also in Asia, Australia, Canada, Africa, Latin America, and Europe. Kenneth is married to Gloria. Their 3 children, Kellie, John, Terri, and their families are also active in KCM.

You see, faith opens the door to God’s promise for you.

And patience keeps it open until that promise if fulfilled. _ Kenneth Copeland

Visit us at  KNCB.org. to listen to the best in Southern gospel music and experience the power of Sunday sermon videos or watch free Christian movies. God Bless You! Faith Forward!